Like all other countries in the world, Somalia has been affected by coronavirus. It is hard to imagine how it would cope with a giant spike in cases, given its broken healthcare facilities and the fact that so many people live in crammed, crowded camps where it's impossible to keep at a safe physical distance from each other, and where there is not nearly enough (or, in some cases, any) running water and soap.

Despite or perhaps because of all the challenges, people are coming up with all sorts of innovative ways of spreading the word about how to prevent the spread of COVID-19, from cartoons, to comedy sketches, from songs to poems.

Here's a BBC piece I wrote about some of the things that are being done:

One of my BBC pieces about Somalia and coronavirus

Here's the script of another BBC report I did - you can click on the links to see the song and the video:

Aid agencies are warning of a catastrophe in Somalia if coronavirus takes hold. They say it's likely the number of cases is far higher than the 1054 (check and update if necessary) officially confirmed. Despite the country's many challenges, Somalis are coming up with all sorts of inventive ways to try to stop the spread of COVID-19. Our Africa Editor Mary Harper reports:

Somalia is an intensely oral society, so special poems and songs are being written, urging people to wash their hands regularly with soap, to maintain a safe distance from each other and not to visit people when they are sick. Even the finance minister has written a song. But there are huge challenges. Years of conflict, drought and corruption have left a broken healthcare system. Millions have been displaced, living in cramped camps, with no access to regular supplies of soap and water. Social distancing is impossible. The military has been deployed to hand out masks in camps for the displaced. Soldiers are driving a specially designed COVID-19 awareness bus around the capital Mogadishu, with loudspeakers blaring out a song urging people to do what they can to protect themselves:

Comedians and cartoonists have also been deployed. Somalia's most famous cartoonist, Amin Arts, has drawn pictures with people shielding themselves from huge green viruses. He is preparing a special one, featuring camels, for the country's large population of nomads. Camels have also been used in videos - people are being urged to keep at least a camel's-length distance from each other.

Two popular young comedians have clubbed together to make a series of videos featuring broomsticks - another way of showing how far people should be from each other. These have proved hugely popular, downloaded from the internet hundreds of thousands of times. One big challenge is dispelling myths about the virus. The jihadist group Al Shabaab, which controls much of the country, says it has been brought in by infidels. Others believe only Chinese people can get it, that all Muslims are immune, or that it can be cured by eating a special kind of sweet. Even if the correct messages are getting through, Somalia will not be able to cope with a big outbreak. It is already struggling with the worst locust invasion for twenty-five years and devastating floods. There have also been years of drought and more than three decades of conflict.

Here are some photos of the soldiers spreading the word about the virus. 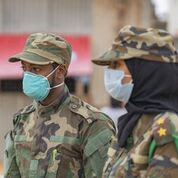 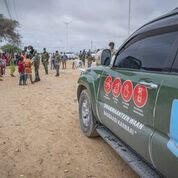 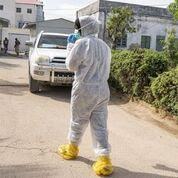 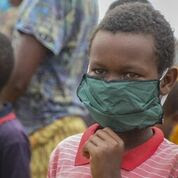 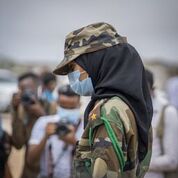 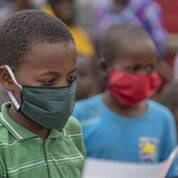