I have been lucky enough to talk to Somalia's most senior religious leader, Sheikh Ali Dheere, the deputy minister of foreign affairs, Osman Aden Dubow, the deputy coordinator for the Prevention and Countering of Violent Extremism in the Office of the Prime Minister, Koshin Abdi Hashi, and the university professor and senior adviser in the ministry of foreign affairs, Mohamed Ali.

The told me about what Somalia's religious community is doing to help stop the spread of the virus and to counter Al Shabaab's messages that coronavirus has been imported by 'crusaders' such as the Africa Union intervention force, AMISOM.

I wrote a BBC report about it, which you can read if you click here: My piece on Somalia's religious leaders and coronavirus

US airstrikes and civilian deaths in Somalia

This is a report I did for the BBC about Amnesty's recent findings on civilian deaths and US airstrikes in Somalia. 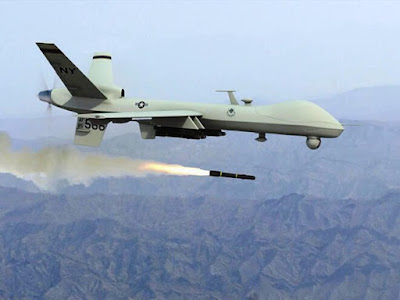 The rights group, Amnesty International, says it has unearthed evidence that recent US drone strikes in Somalia killed and injured civilians. The US has significantly increased air strikes against the Islamist group Al Shabaab since Donald Trump took office. It has only admitted to killing two civilians – a woman and a child in 2018 – since it started its air campaign in Somalia more than a decade ago. Our Africa Editor Mary Harper reports:

Amnesty says an eighteen year old woman and a fifty-three year old banana farmer were killed in two separate drone strikes, one in the town of Jilib, the other in Kumbareere village. Three others were injured. The US acknowledged the attacks but said they killed what it described as Al Shabaab ‘terrorists’. Amnesty analysed satellite images and video evidence, as well as speaking to family members and the victims’ communities, who insisted the dead were not members of the militant group. Amnesty says US air strikes have in total killed more than twenty Somali civilians. It is possible the deaths of civilians will radicalise their family members, pushing them towards Al Shabaab. On Tuesday the US military announced it would from next month publish reports on allegations of civilian casualties in its Africa operations. The US is involved in counter-terror operations across the continent, principally in the Sahel and in the east and Horn of Africa.
Posted by Mary Harper at 08:09 No comments:

CUE: One of Africa’s longest-running conflicts is that in Somalia. It has gone on for more than thirty years, and has taken many different guises, from clan violence to warlordism to radical Islamist militancy. There’s a huge international presence in the country, ranging from African Union forces to US special forces, but they are unable to restore peace. Our Africa Editor, Mary Harper, has just returned from the country.

It happened a few hours after I landed in the capital Mogadishu. I was in my room – a converted shipping container - in the heavily protected international airport. I heard the crump of mortar fire, not far away. I later heard the weapon had landed inside the ‘green zone’, and that a man had lost his leg.

The Islamist group, Al Shabaab, had managed to fire the mortar into what is supposed to be the safest part of the city.

A journalist friend told me how a car blaring music had drawn to a stop on an ordinary street, where people were going about their daily business. Two men - dressed casually in Western style clothes - got out of the vehicle. Nobody paid them much attention. They opened the boot and brought out a contraption, used it to fire a mortar, then got back in the car, music still pounding.

This brazen incident showed how Al Shabaab is able to operate in the heart of the capital, which is supposed to be under government control. The group not only carries out regular attacks. It raises taxes in the city, including on goods arriving at the port. It distributes money to the poor and dispenses justice from mobile courts, which are considered less corrupt and more efficient than other courts. I was told even an MP used an Al Shabaab court to settle a land dispute.

The group continues to govern huge swathes of territory, mainly small towns and rural areas. But it is under threat.

Its middle and senior ranking leaders are targeted by US drone strikes, which also kill civilians and their precious livestock. The Somali army, supported by African Union forces and American advisers, has had some recent success, capturing a string of towns and villages outside Mogadishu, and, crucially, holding onto them.

The unit Al Shabaab fears the most is called Danaab, which means ‘lightening’. These are elite US-trained commandos, who wear black balaclavas and carry their guns properly, unlike the rag tag bunch that makes up the regular army.

But despite all of this, Al Shabaab continues to strike in Mogadishu, other so-called government-controlled towns, and targets outside Somalia.

The recent mortar attacks on the airport ‘green zone’ have struck fear into the heart of the United Nations and other internationals stationed there, including burly private security personnel and the British embassy with its black door - a brass Number 10 nailed onto it - just like Downing Street in London.

At night time, some UN compounds are not lit up – they are in pitch darkness, a safety precaution against Al Shabaab attacks. One night, I was making my way through the blackness when I bashed straight into a concrete barrier, falling head first into the sand and badly bruising my body. It was humiliating.

There is much talk in Mogadishu of the forthcoming elections. In Villa Somalia – home of the Somali president and other top officials – ministers plot and scheme, and seem to pay little attention to the desperate conditions of people outside the compound. There are about 800 camps for the displaced in the city, with igloo shaped structures fashioned from plastic, scraps of metal and faded pieces of cloth. Some people have lived there for more than two decades.

There are also those who make a fortune from Somalia’s war economy. The internationals are paid danger money even though many of them never leave the relative safety of the ‘green zone’. Somali businessmen and former warlords make multi-million dollar deals in the property, telecommunications and financial sectors. Brightly coloured buildings, shops decorated with cartoon-like paintings displaying their wares, and luxury apartment complexes spring up around the city, some already scarred by Al Shabaab attacks.

Every time I go to Mogadishu, I feel that everything changes on the surface but everything remains the same underneath. Amid the shiny new buildings and bright new technocrats, Al Shabaab, and now the Somali branch of the Islamic State group, carry on killing and bombing.  The government – still – doesn’t work. Somalia’s young population has known nothing but war. Which poses the question: if people don’t know what peace looks like – how on earth are they going to be able to bring it back?

Here is a list of my forthcoming and past events. Please come if you can!

All events have been postpone or cancelled due to coronavirus

Guest lecture on working as a journalist in Africa

Food and Power in Somalia: Business as Usual? 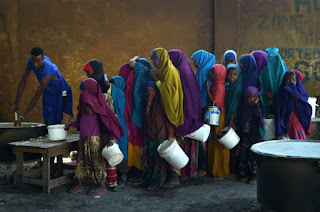 Somaliland Launch of 'Everything You Have Told Me is True' 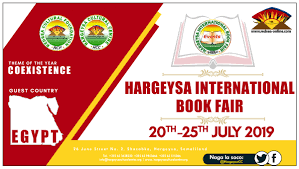 Trauma and Reporting in Somalia

Discussing 'Everything You Have Told Me is True'

The Many Faces of Al Shabaab 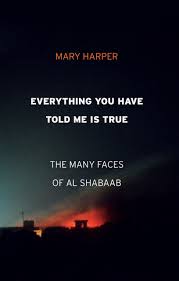